No Toy Food. Why?

Approx 18 months ago I read an article regarding loose parts and how they can be used instead of toy food. This got me thinking.  Do we really need toy food?  Not only is it usually plastic, so once damaged and no longer safe to use, it ends up in landfill, sitting there going nowhere and possibly polluting the soil. I did make the swap several years ago to wooden play food, and although this looked lovely when new, it soon became chipped and tired looking, loosing its appeal.  Toy food also took up a lot of valuable storage space.

I started really observing the children in their play.  What did they actually do with the toy food?

The first thing I noticed was it would often end up left on the floor. It’s main use was to fill bags and other containers, a schema that I have found many children follow at some stage in their development.  This would then often get tipped out onto the floor and left as they used the bags and other containers to fill with other items they find. The plastic food would often get accidentally trodden on resulting in it becoming squashed or cracked. The wooden toy food would gradually become chipped.

Did the children use the toy food as food? …. yes, of a sort. Quite often the food would be to big to fit more than 2 or 3  things onto a plate or in the pan so they didn’t really get used together. When I engaged in discussion, the food was one thing, a sausage, a piece of bread, a tomato. There was some roleplay by the older children using some of the toy food but the children never seemed fully engaged and were easily distracted. 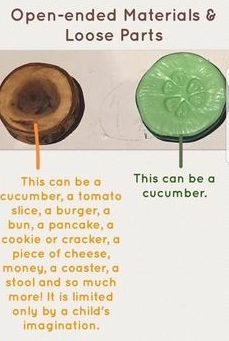 It was spot on. The toy foods never represented anything else. It was never / couldn’t be combined to create something else. The children weren’t using much imagination because they didn’t need to.

So one weekend I took all the toy food away. I put this into storage to begin with, just in case, but eventually it was passed on for others to use rather than throwing it away. I have only had 1 child ask once where the toy food was. They have never asked again after I explained how they can now create their own food with anything they find. The toy kitchen has become one of their favourite areas in their play.

I have a small selection of loose parts but the one thing that gets used daily to create food/meals is the play dough. The children are creating their own food/meals, combining the different coloured or scented playdough and loose parts, asking each other or myself what we would like, or telling us what is on offer, using paper/notepads and pencil to make notes (early mark making), talking about what they are making,  engaging in creating their food/meal, linking what they make with their own experiences eg making a birthday cake using sticks as candles and singing happy birthday and making spaghetti and meatballs as that’s what they had for dinner at home the night before.

The children are so much more engaged in what they are doing, using their imagination, working together, linking ideas/thoughts, using lots of language, and most of all, having fun in their play.

Lets not forget the children who enjoyed filling bags and other containers. They still do this and it stills seems to be a common schema, but they use other resources and loose parts (offering a more varied sensory experience) instead.