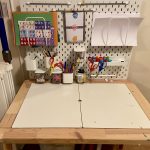 Two weeks ago we attached this notice board from Ikea to the children’s table that we already have, also from Ikea, after coming across an idea on pin interest. The pens/pencils/scissors etc have always been available to the children to use wherever they like, within reason, however, because they were in drawers, they often didn’t go self choose these items, even though the drawers were labeled with a photo.

This probably hasn’t been used as much as I thought it would but I think that is down to a change the children’s interests at the moment, however, I have found that when they need a pen/pencil or pair of scissors, they have gone to the board and found them with ease and taken it away to use in their play which is what I was hoping for.

Brackets to attach to table

Where I got the idea from

We use cookies on our website to give you the most relevant experience by remembering your preferences and repeat visits. By clicking “Accept All”, you consent to the use of ALL the cookies. However, you may visit "Cookie Settings" to provide a controlled consent.
Cookie SettingsAccept All
Manage consent

This website uses cookies to improve your experience while you navigate through the website. Out of these, the cookies that are categorized as necessary are stored on your browser as they are essential for the working of basic functionalities of the website. We also use third-party cookies that help us analyze and understand how you use this website. These cookies will be stored in your browser only with your consent. You also have the option to opt-out of these cookies. But opting out of some of these cookies may affect your browsing experience.
Necessary Always Enabled
Necessary cookies are absolutely essential for the website to function properly. This category only includes cookies that ensures basic functionalities and security features of the website. These cookies do not store any personal information.
Non-necessary
Any cookies that may not be particularly necessary for the website to function and is used specifically to collect user personal data via analytics, ads, other embedded contents are termed as non-necessary cookies. It is mandatory to procure user consent prior to running these cookies on your website.
SAVE & ACCEPT